April 2017: Delivery of a Hanse 495 from Sibenik/Croatia to Figuera da Foz/Portugal

April 2017: Delivery of a Hanse 495 from Sibenik/Croatia to Figuera da Foz/Portugal

Here is a report of a yacht delivery, which we undertook for a Portuguese customer in April 2017.

Read what Captain Lennart has to say about this trip from Šibenik/Croatia to Figuera da Foz/Portugal:

My crew and I arrived at the 10th of April in Šibenik.
The boat “Jilly“ is a Hanse 495. She has an age of 6 years, a marvellous design and is comprehensively equipped.
The contact to the owner is very open and honest from the beginning, well appreciated that. Thanks Paolo…
While my crew was busy with taking provision, I started my first walk around.
“Jilly“ is in a very good condition, she has not been used a lot for the last years,
After inspecting the vessel ( I noticed only small deficiencies, by the way the wheel turned from one side to the other, I did not feel too much play in the gearing system…) there is only one way to find out, what’s the matter with her:
We have to move her.
The weather forecast promised us slight winds from the aft.
For the beginning we had really good conditions.
Our first leg brought us to Messina and taught me once more, what I very often experienced before.
Don’t trust any ship surveys, unless they were made by yourself.
Some statements in the survey were just wrong, but what is more important,
a surveyor most likely never takes the boat out for a sea trial and his competency very often consists of noting what he gets to face at first glance.
Some examples
The survey said, that there is a radar on board. That’s true.
But is a radar on board a navigational aid, when its only on board and not operational?
The next question (assuming the radar is operational) would be:
Can I work with what the screen is able to show me? But that is step two, you cannot judge it without completing step one.
The survey mentions further a former leakage at the main engine seawater outlet.
Well, to be honest, he was close to the reason of the leakage.
He just forgot to mention, that the seawater hose of the generator, which was mounted on the top of the main engine, caused the seawater draining to the main engine.
The survey mentioned, that the sails are worn about 75 %.
When I counted the amount of alcohol, left from the former owner, I got in the near of 75 %, but does this have anything to do with the sails?
What is really important concerning sails on a boat?
That you can use them.
How to find out ?
Hoist them! Put them out!
At that point, if the surveyor had done this, he would have recognized, that it was not possible to hoist the main fully, and that you couldn’t furl the jib in and out without a handle. 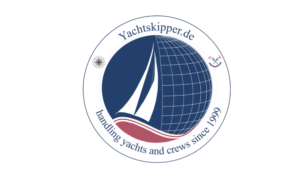 Dear Customers and Guests of Yachtskipper.de/eu,

due to the current situation in connection with Covid-19, deliveries and trainings are currently not possible.

However, we are already making appointments for the period after the restrictions / border closings. All contracts relate to the period X + days (provided the weather conditions allow it) and give you the security that - as soon as it is officially possible again -

your projects will be carried out by us.

Stay healthy and take care of yourself and your loved ones!