please excuse my English, it is not my native language.

I am the skipper of the catamaran SEAGULL, which is still in Brighton, on the same spot, where you worked on it, close to the marina office, pontoon 15, right at the start.

I had to go back to Germany, because I had other duties, and will probably return next week.

We already talked about what happened, but I want to give you a reminder:

Coming from Cuxhaven/Germany, we sailed into Brighton on the evening of the 16th of July. As we were on our way to Spain, we only went into the marina, because we knew that the winds would soon turn against us.

As we were mooring, the starboard engine stopped all of a sudden. We were able to restart it, but we did not like the fact, that it was unreliable. Next morning, we asked in the marina office, if they could recommend a local workshop, to take a look at the engine. They gave us your phone number.

You send us Dave. After 20 minutes he came to the conclusion, that we have a diesel bug in both tanks. He’d found some black grease in our prefilter. With this information, it was clear, that the tanks would have to be emptied and cleaned and all filters would have to be renewed, etc. The owner and I came to your office to speak about the pending job. You told us, that you couldn’t do it before the weekend. It was a little shock for us, because we were on a delivery and had had planned to keep on sailing much sooner. For a moment we thought about doing the job ourselves, but because we did not have the right equipment with us, nor the knowledge about disposal options, etc. We decided to wait until Monday and let you do the job more professionally.

On Monday morning we moored at the fuel pier and Dave came again. I offered him a hand. He emptied the tanks, cleaned them, changed the filters. After 6 hours we fuelled up again and went to your office to pay the sum of 499 Pound, which included 4 new filters for the engine.

The weather allowed us to sail on, so we took off two hours after midnight, when the wind was not too bad and the tide was right. The starboard engine sounded good and we were optimistic, that we could continue our journey. Than it stopped. We decided to turn back. With one engine running, we made it to the fuel pier in one piece.

Next morning Dave came again and said it could be, that the blockage is still in our fuel line. To be honest, I was a bit surprised. I thought, we had asked you to solve our problem. To hear, that there is a high probability that the fuel line could still have the bug, raised for me the question, why it hadn’t been exchanged or thoroughly checked before.

After Dave had exchanged the hose, I was furthermore surprised, that we would have to pay again. You had 127 Pound on the bill. You said, it was the hours of labour and the cost for the fuel hose. We protested a little and agreed that we only would have to pay 100 Pound.

Again we started in the following night. 4 men got up around 02:30, left the harbour for the 3rd time and again the engine stopped. We made it back to the fuel pier. I guess it was a little shock for you to see us again.

On Wednesday you went on trying to find the error. You cut a new thread into the bleed screw, double checked every connection. We tested the engine at the pier with 1500 RPM’s and it sounded all right: Enough fuel seemed to be supplied from the tank to the engine, even under load.

We did not have to pay this time, and – as there were two warships waiting to moore at the fuel dock, we decided to give it a go and leave the harbour for the 4th time around midday.  Again – after one mile the engine stopped. This time we almost came in trouble, motoring only with one engine. The waves in the marina entrance were quiet aggressive.

We couldn’t go back to the fuel pier because of the warships of the Royal Navy, so we took the risk, to go to our old berth on pontoon 15. Sometimes we were able to restart the engine for a few seconds, so we made it without damages.

You came again to help us. This time with more men, feverishly looking for the error in the system. I tried to phone the constructor, Lombardini, to hear, if there are any similar reported cases, where an engine is running and stopping and running. They said the bug could be in the injectors. But why, was it running without an error, when the fuel came from an extra-tank? So your next guess was, that it could be the pipe in the tank, where the fuel is sucked in. Maybe the pipe had got a damage, while Dave had cleaned it.

You told us on Wednesday afternoon, that you would have to take the pipe to the workshop to test it there and can’t bring it back before the next morning. We became a bit desperate. Because not only were we stuck on a catamaran without doors between the rooms since one week in Brighton – also time was running out for us. We already wanted to be in Spain by now. Certainly there are delays on a passage, but one week? We were already starting to quarrel. One week of feverishly searching and 4 attempts to get away had gone on our nerves. And on yours. On that afternoon you pulled out. You said, you couldn’t put “any more time” on this. There must be a problem with the engine, but it is “unsolvable”. One of our crew members, Marcus, asked you for a very last test: Again he wanted to see, if the engine was running with an extra tank. You tested it again under load with 2000 rpm’s for 15 minutes and the engine seemed all right. Then you really pulled out and said: “Good luck!”

As chance would have it, an old friend of the owner, Kalle, had sailed into Brighton with his Van der Staadt 47. He is a german engineer and does almost everything by himself. Not only did he built his own boat, also he works on his engine by himself.

He came to help us. He tried this and that. Finally he installed a new diesel pump, which we had as a spare part. We tested the engine under load – and it worked!

So again, we said good by in the marina office, and planned to sail away in the middle of the night for the fifth time. We were not really optimistic, but we just had to go. An approaching low pressure system would bring easterly winds, so we were thinking to go straight to Brest, when we left the harbour in the dark at 01:00 am.

After one mile, the owner said to me. “The engine sounds good, doesn’t it?”

He answered: “That is more than the last time!”

Just five minutes later, I was occupied by some navigational duties, and forgot about the engine. Then it stopped. We went back, almost in a routine, but also in shock: This was a commercial trip for me. My mate, who is an excellent sailor would leave the yacht in a day from now, because time was running out for him. Wife and daughter of the owner, who had already travelled to Vigo were waiting in vain.My girlfriend, who had planned to travel to Vigo to see me, booked a trip to Florence. And Marcus, who was crew onboard, had only sailed from Belgium to Brighton and was deeply disappointed. For the owner it was a horror. For all of us it was a really bad trip, we couldn’t enjoy Brighton, because we were constantly breeding about, what the problem could be.

Than the owner himself solved the riddle: His friend Kalle had told him, although it had been cleaned, he should check the tank again. So he unscrewed the intake. Doing that, he lost a part. Disgusted he longed into 100 liters of diesel trying to find it again. As tyacht diesel in the U.K. is red, you can’t see anything. Something soft touched his fingers. He pulled it out. It was a rag! A rag, which once had bean a sweat shirt! Huge and extra thick. Still with black grease on it. The cloth had been lying under the intake manifold.

This realization gave us some relief. Now we knew, why the engine had run in the harbour, but not in the sea, where the waves had made it jump, until it was sticking under the intake. There was no chance for the pump to suck up enough diesel to supply the injectors.

We already spoke about it in your office, as we showed you the rag and you already apologized. We accepted the apology, as we are still guests in a foreign country. In Germany we may have sued you. You said, you wanted to refund us some of the costs, which the repair had caused. I talked to the owner about it. He said, for him it would be fair, if you refund one week of berth fee for being stuck in Brighton. That would be

I guess you could cheer him up a little, when somebody would just walk along the yacht and give it to him.

With my best regards,

Skipper of the Seagull.“

„Hi I have visited Seagull today (11.00am) and personally apologised to the owner and given him £300 to cover Brighton marina fees.

Once again I’d like to apologise to you and let you know the necessary disciplinary action has taken place. 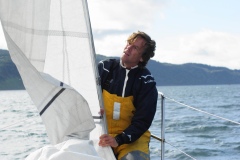 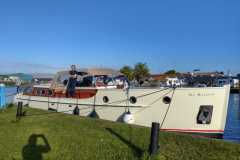 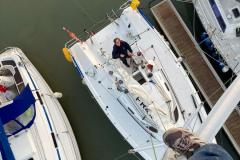 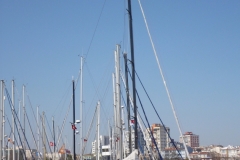 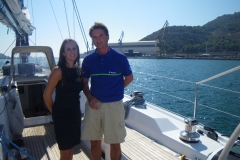