Travel – again very pleasant, despite or especially in the pandemic. With co-skipper to La Rochelle by train. Change trains in Paris. Through the metrolabyrinth with heavy sea luggage, that is always a challenge. Continue by fast train to the Atlantic, 13 hours from Hamburg is the starting port. 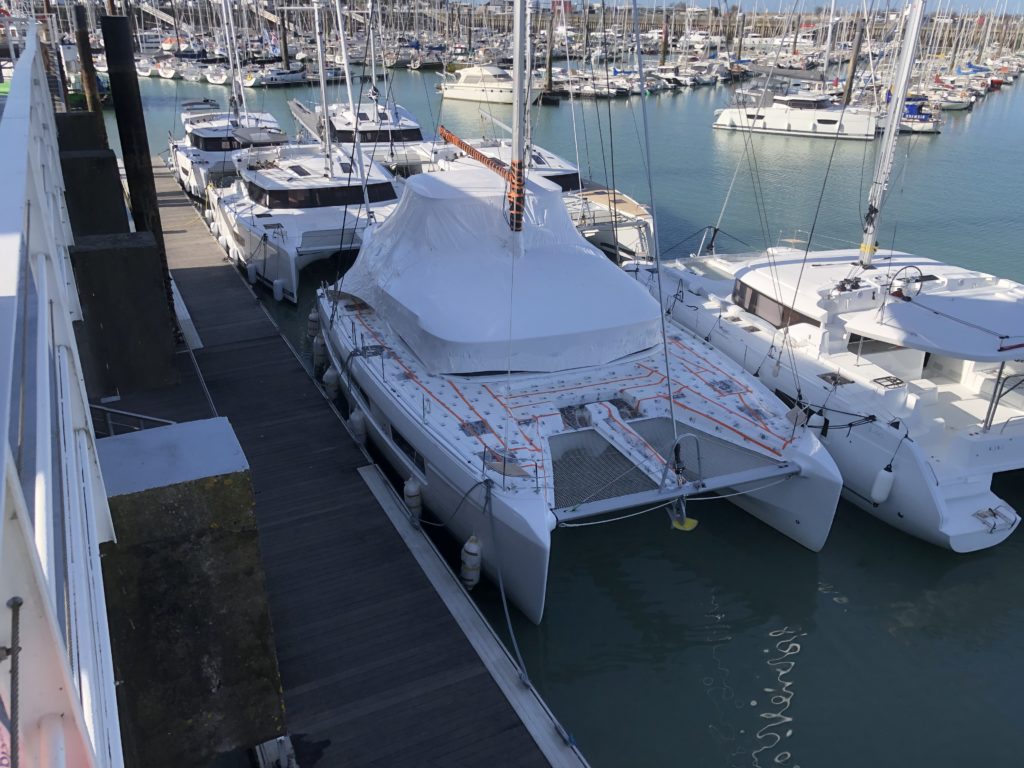 At the visitors’ pier in La Rochelle: Brand new catamarans and trimarans – quite a few big ones too: Lagoon’s, Fontain Pajot’s, Neel’s. Partly still planned, as if fresh from the assembly line. Friendly welcome from the owner Jochen, a medical specialist, and his wife with champagne and baguette. Jan, a friend of theirs has also arrived. Also on board: two snow-white Maltese with beady eyes.

I had already guessed what the new owners have behind them: The shipyard – Fontaine Pajot – finished the yacht with a delay, which shook the schedules and pushed the couple to their limits. Such large yachts are complex, more like a house than a car. Their commissioning is more a process than a point in time – which is often underestimated. Some people take advantage of the hardships: The owner tells me that he was approached on the pier by a German named Thomas. Thomas’ business model is to support new owners who are overtaxed, left alone by dealers and shipyards, and overcharged by craftsmen. He organizes this process of yacht commissioning and keeps an eye on his pappenheimer – the craftsmen. Jochen hasn’t used Thomas’ services, but you can tell he’s looking forward to finally leaving La Rochelle behind – after all that work –  under sail.

The next morning I tighten the dinghy, the crew bunkers, later we make a test drive in the best weather: it’s the weekend. With the tide, dozens, if not hundreds, of small and large yachts run out of the La Rochelle channel into the open sea. Whole societies sit together on board, like Monet.

We pull up the main, try out the reefs, test the autopilot and also other electronics. Everything seems to be okay.   Also the interaction with each other.

The next day the Yachtskipper team goes for another run, buys fresh bread and downloads everything necessary weather-wise. The owner is already hoofing it. At the gas station, however, a mishap: Anna and I are still evaluating the routing program for the trip when we hear it splash. Jochen had apparently tugged with so much force on the nozzle – which was jammed in the nozzle – that when it suddenly came free, he lost his balance and tumbled behind the cat into the fast-flowing water. Man overboard!! It takes us a second to realize, but by then he’s already grabbed the swim ladder and pulled himself aboard. That’s a good start…We finish our refueling somewhat shocked. Jochen suffered a bruised sternum in the fall and complains of pain. But then he waves it off, saying it’s all right.

We pass the Isle de Rei to starboard, round Cape Oleron at sunset and head west-southwest towards Galicia. Finally getting out to sea is always a relief, even if there are still many unknowns on the route: 350 miles, across the Bay of Biscay, a good 3 days until we will be back near land: No one can say whether and how we will get along, and whether the technology of the new yacht will play along.

Jochen suggests sailing despite the weak wind. Promptly comes via satellite the comment of our weather man Thomas. He watches over our track from the back office at home in Germany and writes:

Why not, I think.

The next day a fresh southeast blows. In addition, a 3 meter swell rolls in from the northwest. Ideal conditions. The cat, by no means light, more like a house on skids, makes its way through the sea. We have the first maneuvers behind us, the fishing line is deployed, the heart laughs. Lara, Jochen’s wife, is still a bit unfamiliar with the swell and stays in her cabin. Anna is also indisposed. Jan, on the other hand, feels wonderful. Together we prepare a meal. The  Maltese doggies are watching us and the owner starts to relax.

So the hours pass, but after a day the magic is over. The wind begins to weaken before it dies away completely. Unfortunately, it’s part of the job: engine on and through. But it is not the place where you want to lie in the doldrums for a long time.

On Tuesday morning we reach A Coruña. Over the phone, I organized the mandatory maintenance appointment by a specialist workshop for the new engine. It seems to work out before the Easter weekend. The Seca shipyard from A Coruña wants to send someone to the marina for us later. In the meantime, we drop by again in this old and new city, which lies on the open Atlantic like no other.

The Seca shipyard, which works only in its own marina, takes Jochen for an oil change on the engines (in about an hour of work for 2 mechanics plus material,2 filters and 10l oil) 650 euros. This is nothing other than modern highway robbery.

I chat with a couple of Greeks. They lie next to us on the deserted jetty and have picked up a Lagoon 50 in France with the name Nana and home port Mykonos. They too are waiting for the south wind to give up. In the evening, the rest of her crew arrives. We sit and drink wine at our place, she at hers. In normal times, I’m sure we would have gotten together, shared ideas, celebrated a bit. Corona just won’t let you do that. Everyone minimizes the risk, does not want to risk an outbreak on board. 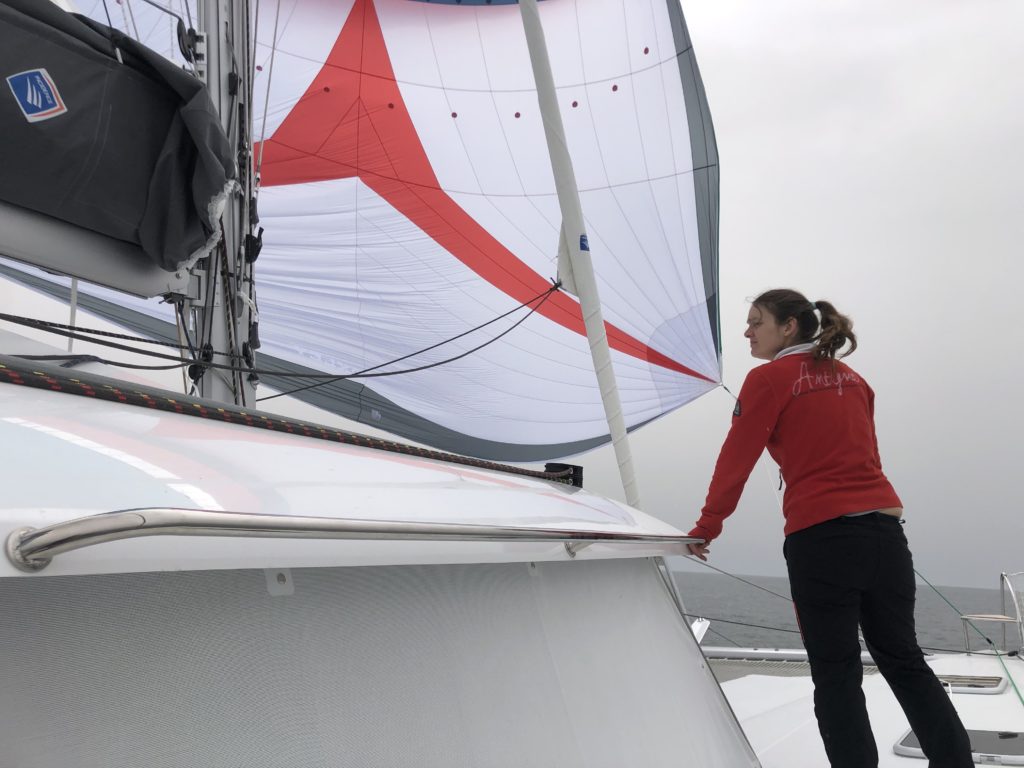 The next day again at Playa del Orzàn jumped into the cold water and made an errand. After a shower we cast off. Engines at night around Cape Fisterre. The Greeks closer under land, are half a knot faster. Fog banks follow.

At noon the next day the sun gains the upper hand, although it remains hazy. I try to radio the Greeks, they also answer. When I want to answer, the power supply of our spark breaks down. I’ll try again. Then it works again, but the confidence in the technology is gone. Good thing I have an inreach device and a handheld radio with me. Especially when it comes to the radio, I have experienced many failures.

Finally, the doldrums are over. We cross in long strokes downwind to the south. The plan to drive through to Lanzarote without stopping gives way to a stop over in Cascais for various reasons. Also  our weather man advises against it, but we don’t want to miss the shore leave before the big blow. On Easter Sunday we run in. I request a port day from the owner. Anna and I take the bus to Sintra, whose hills rise to the north. The pandemic also has its advantages. The otherwise rather crowded place is  deserted. We squeeze under a gate, climb up to a Moorish fort. 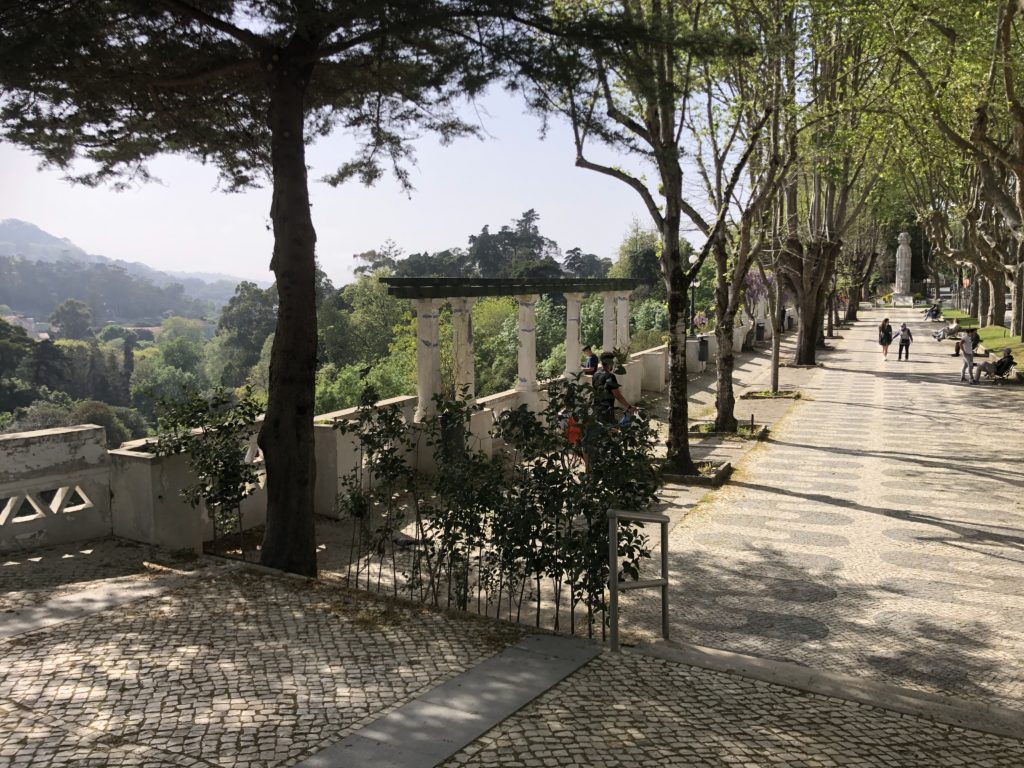 Stopover in Cascais, visit of Sintra 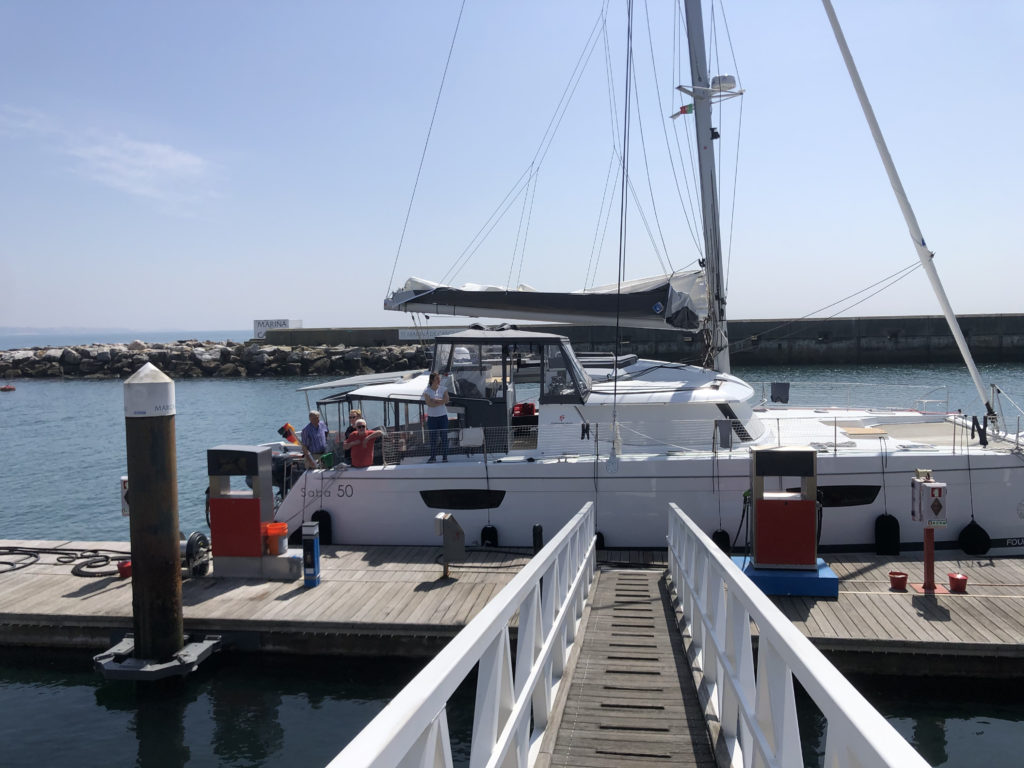 The next day we first motor to the south. The night is quiet. Only shortly before Cape Sao Vicente we set sail, which will not fall again for days. We circumnavigate the VTG São Vicente to the east and set course 200 degrees towards Lanzarote. The crossing traffic becomes less, the wind plays along: 12, 16 knots from northwest. We are getting into the swing of things. The cat runs what it can, we make distance.

The cat is running…

The wind continues. The rhythm of the ocean, the swell, becomes flesh and blood. A constant beat of the waves, we rush through the blue, at night under stars, and only regret that it does not go straight to Brazil.

We go single watches, only Jochen’s wife is spared. Of course, there are also problems: The radio, for example, actually has a quirk: When you press the “send” button, the voltage collapses, the device fails  . This is silly, but nothing that can dampen the joy.

The new ship – far from being a performance cat – runs wonderfully. I arrange a fixed meal a day where everyone can sit at the table and look each other in the eye. Otherwise, the crew falls apart too easily due to the different waking times.

At noon I shoot the sun with the sextant, Anna works her way in. The process consists of three measurements. One before culmination (peak of the sun), one at the time, and one after. This keeps you going for a good two hours, but then you have the position under 5 miles from the GPS position. Old-fashioned, yes, but reassuring to be able to do it. 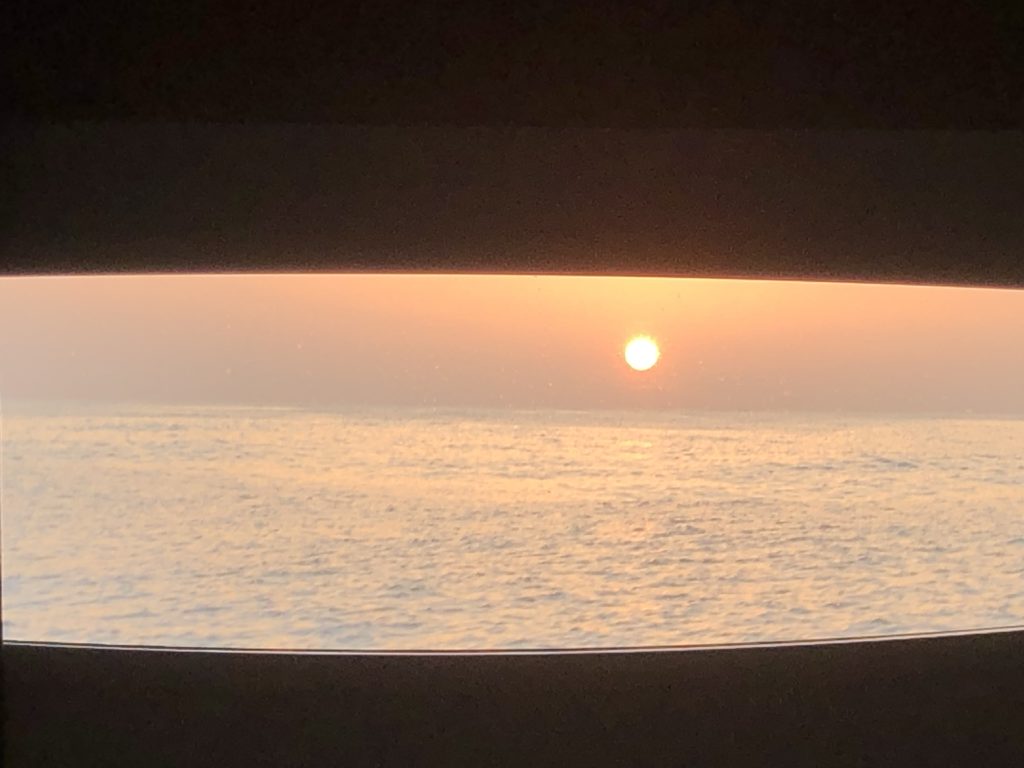 View from the bunk window

After two days we are at the height of Casablanca, about 150 miles offshore. It’s 300 miles to Portugal, and the same to Lanzarote. An hour ago, at dinner, the world seemed fine. Now there’s a knock on my cabin door. Lara says that Jochen is not well.

He reports chest pains, looks taken. He had been quiet at dinner; I had misinterpreted that as contentment. He is, after all, the doctor, says that he wants to go to the hospital by the quickest route, just not to Morocco. Possibly the consequence of the fall in La Rochelle was not just a bruise after all.

We had become a bit slow anyway, pack up the sails and now step on the gas. To be on the safe side, I contact Bremen Rescue by Inreach via satellite, describe the situation. They write me back and refer to the phone number. I suddenly realize again how dramatic it can be out here, so far from any medical care. We try to find out in advance of such a trip by questionnaire, how the fellow sailors health is, but basically you have to expect everything. Fortunately, there are fellow sailors like our Jan, who has Tramal with him for such cases: A painkiller that comes close to morphine in its effect.

5  days after Cascais we reach the Rubicon Marina in Lanzarote. Jochen is doing better. The dogs bark excitedly, finally shore leave. The island is still in the middle of the pandemic, everything open, but hardly any tourists around. We take a day off, enjoy the warmth. Then the owners take us to Arrecife, to the airport: onward to Sardinia. On to the next job….. 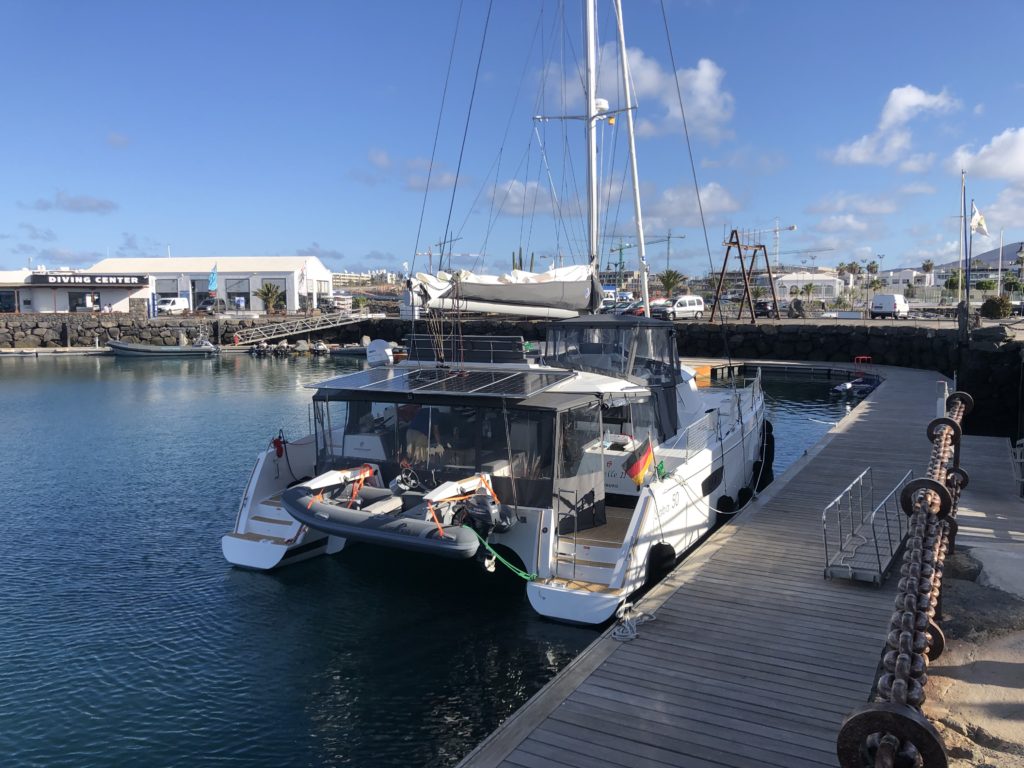 The cat arrived in Lanzarote, everything is ok. 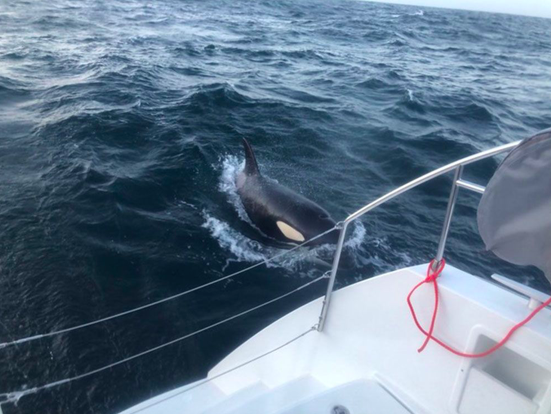 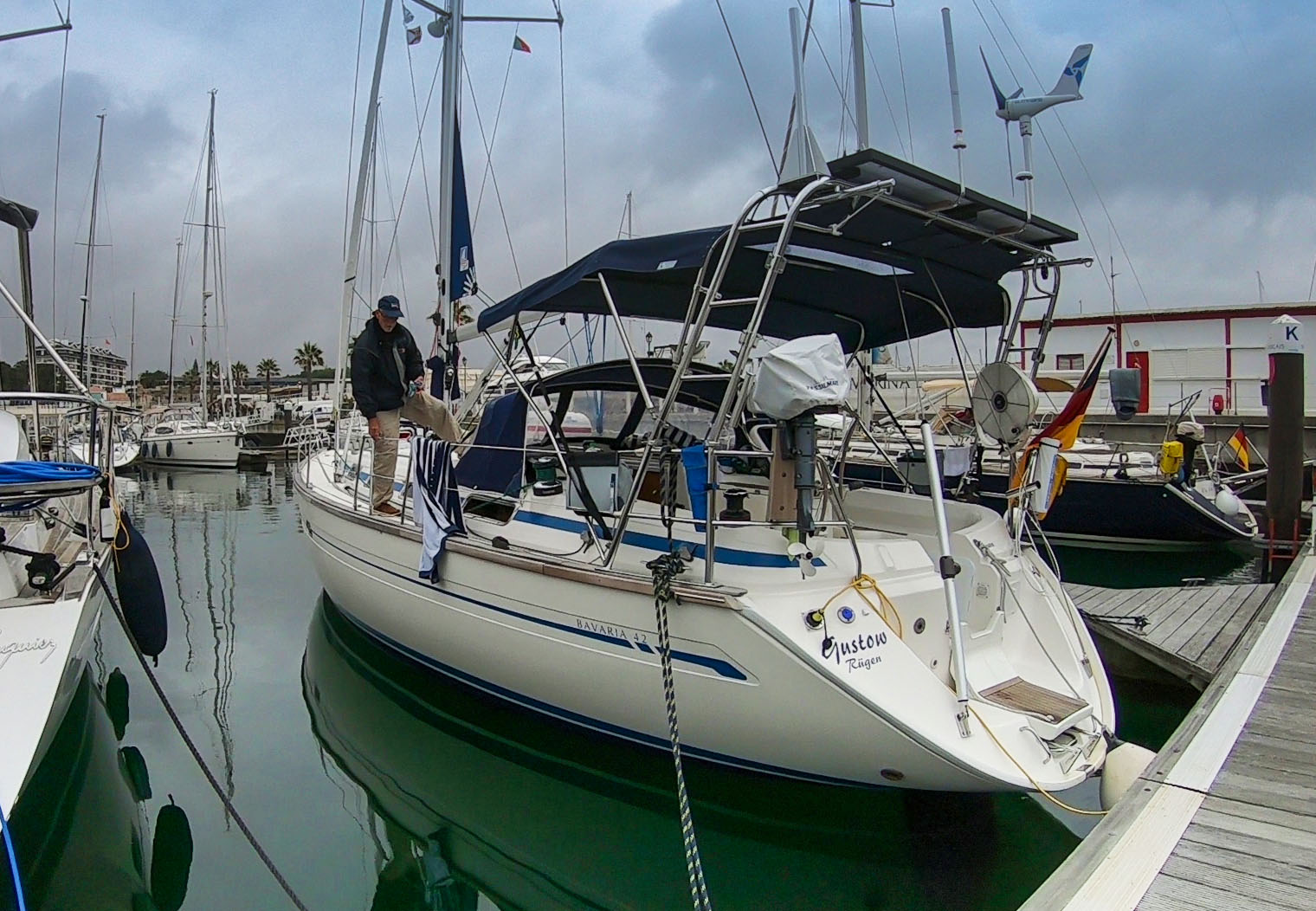 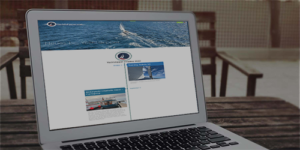